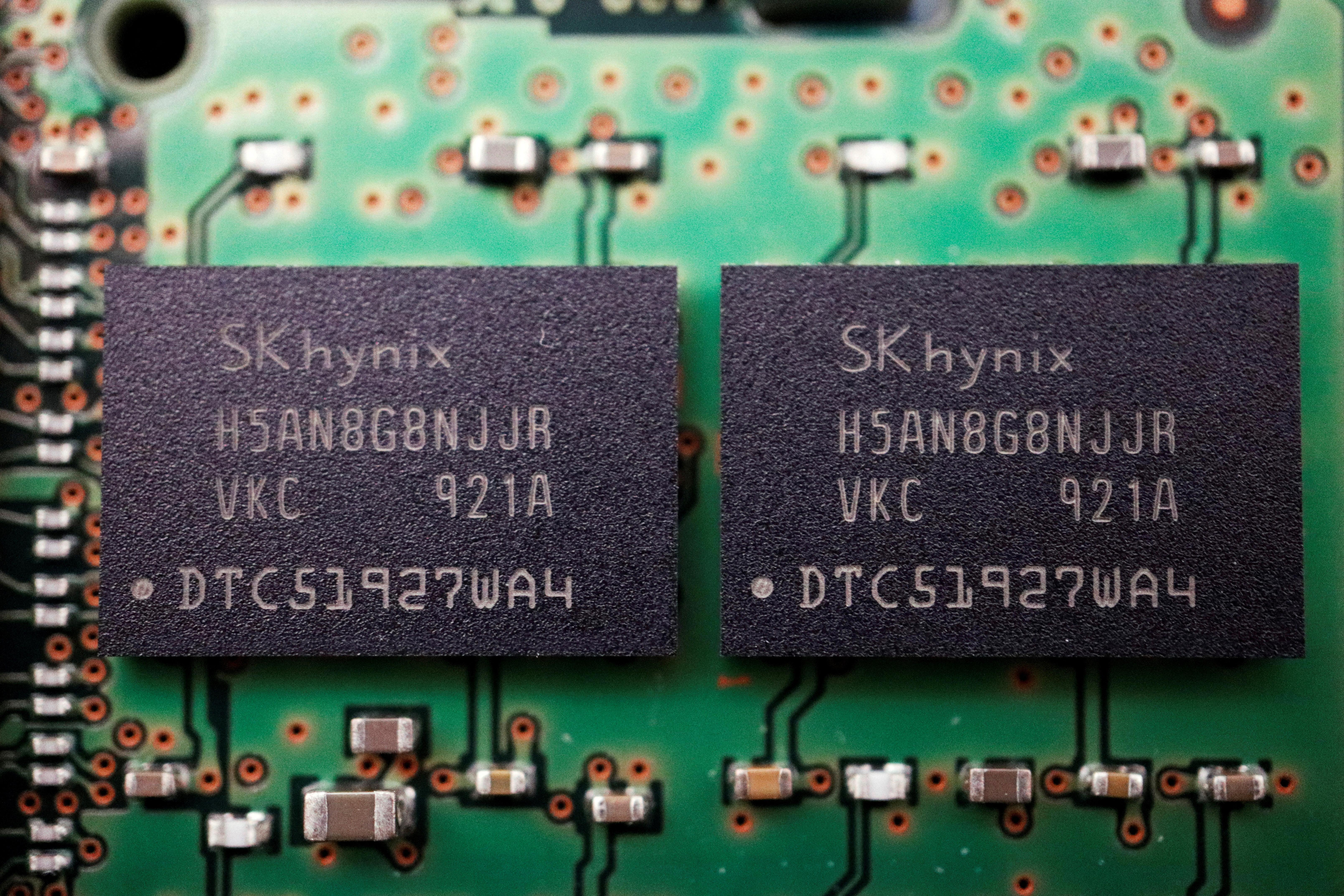 FILE PHOTO: Memory chips by South Korean semiconductor supplier SK Hynix are seen on a circuit board of a computer in this illustration picture taken February 25, 2022. REUTERS/Florence Lo/Illustration/File Photo

The crackdown, if approved, would involve barring the shipment of U.S. chipmaking equipment to factories in China that manufacture advanced NAND chips.

It would mark the first U.S. bid through export controls to target Chinese production of memory chips without specialized military applications, representing a more expansive view of American national security, according to export control experts.

The move also would seek to protect the only U.S. memory chip producers, Western Digital Corp and Micron Technology Inc, which together represent about a quarter of the NAND chips market.

NAND chips store data in devices such as smartphones and personal computers and at data centers for the likes of Amazon, Facebook and Google. How many gigabytes of data a phone or laptop can hold is determined by how many NAND chips it includes and how advanced they are.

Under the action being considered, U.S. officials would ban the export of tools to China used to make NAND chips with more than 128 layers, according to two of the sources. LAM Research Corp and Applied Materials, both based in Silicon Valley, are the primary suppliers of such tools.

All the sources described the administration’s consideration of the matter as in the early stages, with no proposed regulations yet drafted.

Asked to comment on the possible move, a spokesperson for the Commerce Department, which oversees export controls, did not discuss potential restrictions but noted that “the Biden administration is focused on impairing (China’s) efforts to manufacture advanced semiconductors to address significant national security risks to the United States.”

YMTC, founded in 2016, is a rising power in manufacturing NAND chips. Micron and Western Digital are under pressure from YMTC’s low prices, as the White House wrote in a June 2021 report here. YMTC’s expansion and low-price offerings present “a direct threat” to Micron and Western Digital, that report said. The report described YMTC as China’s “national champion” and the recipient of some $24 billion in Chinese subsidies.

YMTC, already under investigation by the Commerce Department over whether it violated U.S. export controls by selling chips to Chinese telecoms company Huawei, is in talks with Apple Inc to supply the top U.S. smartphone maker with flash memory chips, according to a Bloomberg report.

Tensions between China and the United States over the tech sector deepened under Biden’s predecessor Donald Trump and have continued since. Reuters reported on July 8 that Biden’s administration is also considering restrictions on shipments to China of tools to make advanced logic chips, seeking to hamstring China’s largest chipmaker, SMIC.

Chipmakers that take money under the measure would be prohibited from building or expanding manufacturing for certain advanced chips, including advanced memory chips at a level to be determined by the administration, in countries including China.

According to Walt Coon of the consulting firm Yole Intelligence, YMTC accounts for about 5% of worldwide NAND flash memory chip production, almost double from a year ago. Western Digital stands at about 13% and Micron 11%. Coon said YMTC would be greatly hurt by restrictions like those that Biden’s administration is contemplating.

“If they were stuck at 128, I don’t know how they would really have a path forward,” Coon said.

Production of NAND chips in China has grown to more than 23% of the worldwide total this year from under 14% in 2019, while production in the United States has decreased from 2.3% to 1.6% over the same period, Yole data showed. For the American companies, nearly all of their chip production is done overseas.

It was unclear what impact the potential restrictions might have on other players in China. Intel, which retains a contract to manage operations in the factory it is selling to SK Hynix in China, is already producing memory chips with 144 layers at the Chinese site, according to an Intel press release.

US Secretary of State Blinken in South Africa on Africa tour

US Secretary of State Blinken in South Africa on Africa tour